Why are Edible Oil Prices Increasing in India? 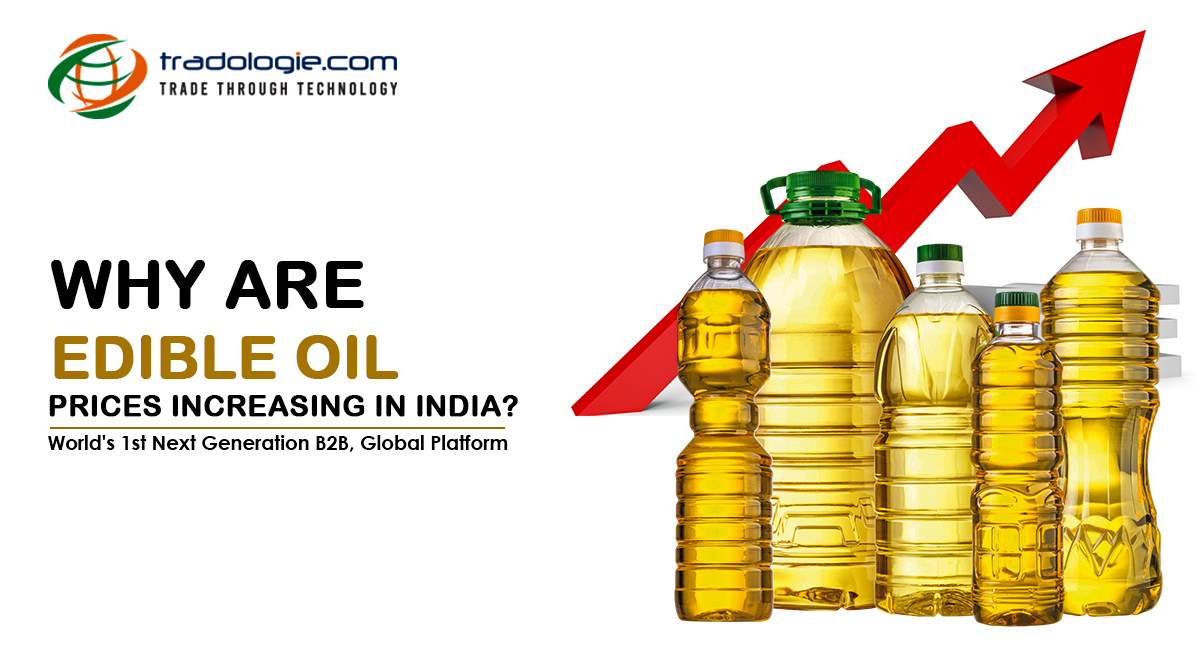 Edible oil prices in India have surged to the highest level in over a decade this month, resulting in distress among millions of Indian households.

The prices of six edible oils — groundnut oil, mustard oil, vanaspati, soya oil, sunflower oil, and palm oil — have risen between 20% and 56% at all-India levels in the last year, as shown by data available on the Department of Consumer Affairs website.

The retail price of mustard oil (packed) has increased by 44% to Rs 171 per kg in May this year, from Rs 118 per kg in the same month last year.

The prices of soya oil and sunflower oil, too, have increased by more than 50% since last year.

The Department of Food and Public Distribution held a meeting with all stakeholders to discuss ways to address the issue of ‘abnormal rise’ in local prices.

There has been a 62 percent spike in the prices of domestic edible oil, according to Pandey.

The increase in domestic prices is a reflection of international prices because India meets 56% of its domestic demand through imports.

In the international market, prices of edible oils have jumped sharply in recent months due to various factors.

The price of crude palm oil (for the most actively traded futures contract at the Bursa Malaysia derivatives exchange) was quoted at 3,890 ringgit per ton on May 25, compared to 2,281 ringgit a year ago.

The prices of soya beans at CBOT and of Malaysian palm oil determine the prices Indian consumers pay for edible oil.

Even the Food and Agriculture Organization (FAO) price index (2014-2016=100) for vegetable oils, an indicator of the movement of edible oil prices in the international market, has soared to 162 this year, compared to 81 in April last year.

Production and Consumption of Edible Oil in India-

Edible oil companies in India import from different countries to meet the demand of Indian consumers.

In 2019-20, domestic availability of edible oils from both primary sources (oilseeds like mustard, groundnut, etc.) and secondary sources (such as coconut, oil palm, rice bran oil, cottonseed) was only 10.65 million tonnes against the total domestic demand of 24 million tonnes — a gap of over 13 million tonnes.

The major sources of these imports are Argentina and Brazil for soya bean oil; Indonesia and Malaysia palm oil; and Ukraine and Argentina again for sunflower oil.

It may be noted that India is the highest importer of edible oil in the world and over 60 percent of domestic needs are met through imports. This means international prices do play a big role in determining prices in India.

International crude edible oil rates have sharply increased this month, compared to the price a year ago. This includes crude palm oil and crude soybean oil.

The sharp rise in edible oil prices has sparked major concern among government officials as the commodity impacts a much wider portion of the population in comparison to other essentials oils like petrol and diesel.

Tradologie.com brings you the most convenient route to bulk procurement of, Edible Oil directly from the reputed edible oil manufacturers.

Exporters can boost their edible oil business through Tradologie.com as it is the world’s 1st Next-Generation B2B enquiry to delivery trade enabling platform facilitating trade of Agro-commodities, raw materials, industrial goods, and construction material, across the globe.

Over the past four years of operation, Tradologie.com has been able to develop a network of over 3,25,000 verified buyers across 65 countries who have successfully transacted trade over 40 billion through tradologie.com with more than 35000 verified manufacturers and exporters working out of 35 countries. Tradologie.com works by standardizing buyer requirements and arranging live negotiations with verified sellers capable of supplying the buyer on the platform on standardized trade policies which allow for the trade without a phone call or email through the safe conduit provided by Tradologie.com.